Sound design is one of the most overlooked elements in the process of creating elearning, but it could be just what you need to take your elearning project to the next level.

Voiceovers and audio recordings often make up part of the content, however, it's equally important to be aware of the whole soundscape that your elearning will exist in and create.

How important is sound?

– Julian Treasure
"You are 66% less productive in a noisy open plan office."

Think about where your elearning is going to be experienced, a busy open plan office is one thing, but a multi-device course could be viewed anywhere, and with any background noise.

Sound is critical in many visual mediums; modern cinema uses sound effects to create a sense of reality and music to illicit an emotional response. The thought and technique that goes into the process is just as impressive as the visual side.

Controlling the sound in your elearning doesn’t have to mean creating complicated sounds of your own. Making a recommendation that people take the elearning in a quiet environment could be enough to make an impact on the outcome.

Unless you’re designing for virtual reality, you’re not going to be able to control exactly what your learner can see. You can control the screen in front of them but not what’s going on around it. However, if learners are wearing headphones you have complete control of their audio experience.

Sound can be more important to elearning than some people realise. We’re going to explore some of the key factors to consider when creating audio for elearning.

Julian Treasure has some golden rules for commercial sound and they’re a good starting point.

We’ve broken down the three that are most relevant for elearning. Designers need to make sure their choice of audio is:

Sound should add something to the experience and in this context we’re not talking about adding a voiceover to explain a picture or diagram.

It should heighten the effect you’re creating, or give your learners something to latch on to in order to make something more memorable. Telling stories and evoking emotion aids engagement and sound can add a dimension to these techniques that you can’t get from anywhere else.

Borrowing a quote from Eldridge Cleaver, if the sounds aren’t part of the solution, they’re part of the problem - there are no neutral sounds.

Distraction is one thing, but if you’re not careful sounds can actually counteract the effect you’re trying to create. Pay close attention to the next two rules to make sure your sounds are beneficial for learners.

Sound or music must match the tone of the learning; get it right and it will complement the experience.

Sound is capable of provoking a strong memory response and this could be used to your advantage by associating a task with music which could spark the desired knowledge in the future. If you’re creating training on how to use a piece of equipment try recording the actual equipment in its environment and using it as part of the course.

It’s also important to think about the aims of the course; where can audio add value to the learning you’re designing?

Don’t overlook the importance of testing your audio, it should be as important as the other testing you do for the course. Test in the environment that your learners will be in when they take the course, if possible.

With international projects that span different cultures you should test in each area. Just like with text and images there are some sounds that have different significance in different cultures. The University of Adelaide has a fairly comprehensive list of how animal sounds are mimicked in different languages for instance.

Every device that can play back an elearning module has the capability to play sounds. Providing headphones to the learners might be impractical but suggesting they use their own and giving the option to mute the course is a reasonable alternative.

You may want to immerse learners in an environment that they will be a part of when they’re using the training. Using audio that was recorded in that environment can bring the simulation to life and make it more realistic. Sound effects are the most important element in creating a realistic soundscape for a simulation, so concentrate on these if you’re building a scenario.

Music and games go hand in hand, remember Tetris? Chances are the first thing that comes into your head is the soundtrack. You can make your elearning games more engaging and memorable with a catchy soundtrack.

In some circumstances you can use music to deliver an important part of the training. One hundred and three beats per minute is the ideal speed for chest compressions, so the British Heart Foundation used the Bee Gee’s Stayin’ Alive to teach you how to give CPR. Rather than adding extra value, the track is integral to the training. 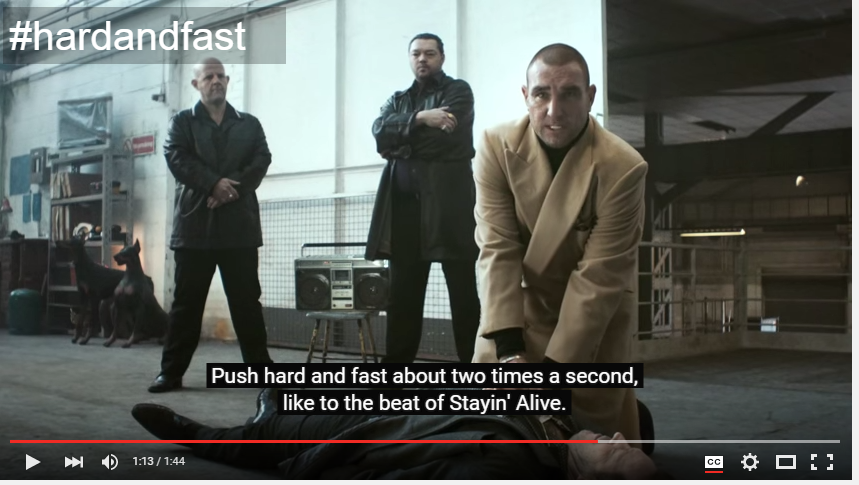 Next time you’re planning an elearning course spend some time thinking about the soundscape your listeners will experience. Can you add sound to heighten the effect of the learning? Can you improve the ambient soundscape the learners are in?

If you’d like to discuss using sound in your next elearning project, get in touch.

We examine the scale of the insider threat and consider whether cybersecurity training is up to the challenge.

Who doesn’t like taking a peek at what others are doing? Feed your curiosity with these 10 real life examples of how companies around the world are using elearning to address some of their biggest challenges.

5 ways to restore the human touch to digital onboarding

We explore how to balance technology and people to ensure new employees are set for up for success with your business.

Great people are fundamental to Sponge. We employ many industry-recognised leaders and are busy growing the next generation of leaders. We don’t just look for talented people who can do a particular job – we look for people who share our passion and values.