The Plymouth-based company has launched a new Christmas game, Save Santa!

Players take on the role of an elf who must find a way through a frozen underground world, collecting presents, dodging yetis and defeating rocket-powered penguins, before locating Santa and freeing him from the clutches of an evil Jack Frost.

It’s the eighth year Sponge has released a complimentary Christmas game instead of sending Christmas cards.

“It’s become a bit of a festive tradition and Save Santa! is our best ever Christmas game. There are six levels to conquer, spike traps to avoid and baddies to defeat. It also has an interactive leaderboard displaying the top ten high-scoring players, and you can also tweet your score from the game. It’s our way of saying ‘thank you’ to our clients and everyone who has supported Sponge in the past year. But as you would expect it’s also a learning opportunity. Creating the game allows our team to try out new ideas and further hone their skills in game design and development. As games become more important within workplace learning, I believe it’s good for people who don’t normally play them to expand their knowledge. So whether you’re an instructional designer, learning consultant or L&D manager have a go and see if you can save Santa!”

The game has been built using the open source HTML5 gaming tool, Phaser. It is cross-platform which means it can run on any device and operating system.

Players are able to return to the game and continue from where they left off, which enables everyone to reach the final ‘boss level’ and ultimately…Save Santa! 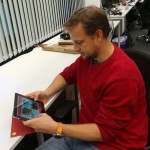 “The Christmas game provides an excellent opportunity to showcase our cross-platform game development and push the boundaries. It also enables us to try new techniques which we can then use in future projects. I’m planning to repurpose the game engine we’ve created for fire safety training in 2016, obviously without any penguins or yetis!”

Sponge is one of the leading innovators in elearning games and gamified learning, and has worked on game-based projects with organisation such as Waitrose, GlaxoSmithKline, Royal Mail and the NHS.

The Save Santa! game is available via www.wearesponge.com/xmas throughout December.

Sponge is Outstanding Learning Organisation of the Year after winning gold at the Elearning Awards last month.