NEWS: A national award celebrating the achievements of women in business has been presented to the founder of elearning company, Sponge.

Louise Pasterfield won the national finals of the Venus Awards in the category of online business. The awards, often called the ‘Working Women’s Oscars’, recognise women who contribute to their local economy and community through success in business.

Pasterfield set up Sponge in 2004. The business, based at Plymouth Science Park, creates custom-made online training for global organisations including GlaxoSmithKline, Toyota, Coca-Cola, Tesco, Google and the United Nations. In the past five years, the company has grown more than eight fold to reach a turnover of more than £3m p.a. 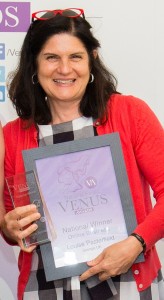 “I’m hoping this award will help raise the profile of Plymouth as a great place to run a successful digital business. The custom-made elearning market is highly competitive and centred mainly around London and the South East. We’ve earned a place as one of the leading innovators in the industry and proved that the South West is a creative hub for the digital and technology sector.”

The business has attracted a host of international elearning awards and this year was named one of the best small companies to work for by the Sunday Times.

In November 2015, Pasterfield was presented with a Devon Venus Award and went on to be judged against finalists from four other regions in England.

She was named as a national winner at a gala ceremony at Audleys Wood Hotel in Basingstoke on Thursday, July 7, 2016.

“I would encourage women in digital and technology businesses to get involved with the Venus Awards. It can feel like a male-dominated sector and the award scheme is a great way to connect with other women who face similar challenges.” 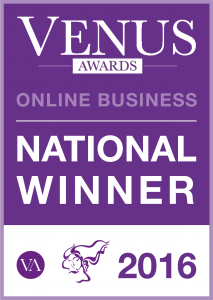