Video is changing as technology allows us to film in 360°s.

It’s an exciting development, but can it really help employees learn what they need to know? 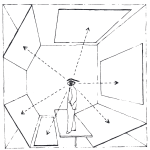 360° filming allows us to capture what’s above, below, to the side or behind, so we can engage with a space from any angle. This immersive experience is the next step in the evolution of video. But our pursuit of 360° viewing is not as new as you might think.In 1935, Herbert Bayer, an Austrian-born designer was working with the principles of 360° field-of-vision to revolutionise the design of art exhibitions. He wanted to tap into the psychology of what someone sees, and involve them more deeply than before in their surroundings. He abandoned standard exhibitions, where you look at a painting at head height, standing in front of it. Instead, he tried to mimic human sight and extend the observable world. We have now made giant strides in enabling the creation of 360° experiences, as Bayer tried to do more than 80 years ago.

Where are we now?

As you might expect, the entertainment sector is leading the way with 360° video. Major TV series are investing in 360° films as companion content. For example, the American drama-thriller series, Mr. Robot released a 360° video to provide background about the main character’s past. It shows just how potent 360° content can be in creating a gripping narrative.

In September 2015, Facebook started offering 360° video on everything from music festivals to volcanic eruptions. One of the most popular examples, to date, is a 360° film of New York’s Times Square in a snowstorm, recorded for ABC News. More than 18 million people have watched the video on Facebook to experience what it’s like in the middle of a blizzard in one of the world’s most iconic locations.

Whether it’s enhancing narrative or exploring an environment in a more immersive way, 360° video is exciting and full of potential.

However, as a learning tool there’s something missing.

360° video is already a step up from flat video, when it comes to interaction. Viewers can control where they look, giving them a sense of freedom. It certainly offers more interaction than regular video content, but you cannot truly engage with the space, only control the viewpoint.

This attribute is useful but limiting if you want to use it as part of a workplace learning programme. For learning design expert, Julie Dirksen context is king, meaning that the environment in which you experience the learning is associated with the subject you learn. With 360° we can provide the ultimate in realistic environment, which has the added benefit of being a safe space in which to practice.

For learning, interactivity is the game changer.

Adding more complex interactions to 360° video not only creates a more meaningful experience for users, but adds the elements that help people learn.

For this reason, I’ve been working on a pioneering project looking at ways of adding an interactive layer to 360° video. By combining our expertise in elearning development with the latest 360° filming techniques, we’ve been able to replicate interactions that you see in learning, like hotspots, decision-making and practice tasks, while providing relevant feedback within the 360° environment. 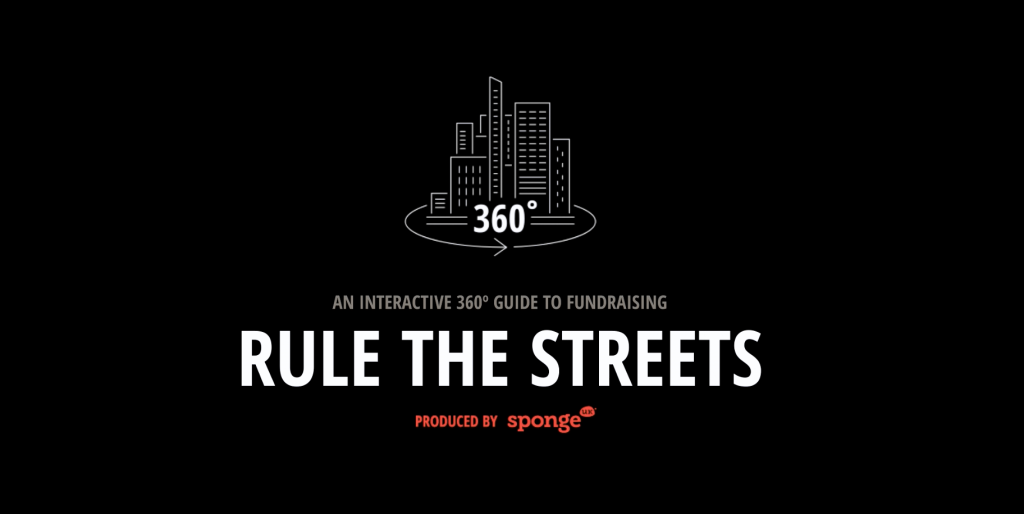 The resulting prototype is Rule the Streets, an interactive 360° video to help charity workers understand and practice the compliance rules associated with street fundraising in the UK. I’ll be talking about the experience of creating this at the Learning Technologies Conference and Exhibition at Olympia London (Feb 1-2, 2017).

Interactive 360° video has some key attributes that make it a great tool for workplace learning. Understanding these will help learning professionals identify the best possible applications in their own organisation. Think about how the following properties could be utilised to help your learners:

So far, our innovation has focused on interactive 360° video as a desktop experience, and the natural next step is virtual reality (VR). Both immerse viewers and allow them to explore a space, but VR requires the user to wear a headset, using the movement of your head and gaze to control the action.

VR is often associated with a deeper level of immersion because you’re cut off from the distractions of the real world around you. Currently, this technology is not widespread in the workplace. Given the fact that interactive 360° video does not require wearables, I think that the desktop experience is well suited to the corporate setting, at least for the time being until the technology catches up.

One thing is evident, as this new world for learning opens up, we need to understand its potential and limitations if we’re to use it effectively in the workplace.

Kate leads the innovation department at Sponge, bringing the latest learning technologies and strategies to international clients from a variety of sectors.

Awarded Learning Technologies Designer of the year, it's clear that great learning starts with bright ideas, if you want to explore an innovative learning solution with Kate, get in touch.